Travel with John and Mattie Les to Israel 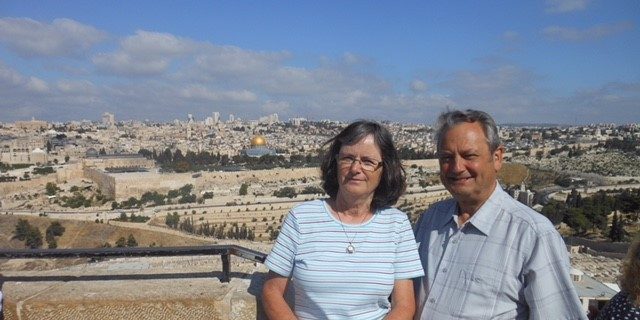 My wife Mattie and I first travelled to Israel in May of 2015. All of the arrangements were extremely well organized by the Ezra for Israel leaders. Absolutely everything was looked after, and we never once felt unsafe in any way. We especially appreciated Erik Gezels, our tour guide. His knowledge of Israel, its history and archeology, is encyclopedic.

We travelled to Israel with a great deal of anticipation. Israel: a land we had read about, in the Bible, all of our lives. Also a land very much in the news on a regular basis.

Rev. Van Zetten of Benthuizen, the Netherlands, travelled with us and preached for us in English both Sundays we were in Israel.

Following are just a few snapshots of our stay in Israel.

Upon our arrival, we travelled to Mount Carmel, where of course, Elijah had challenged the prophets of Baal. To the east we overlooked the Valley of Jezreel;  in the distance to the west: the Mediterranean.  It wasn’t difficult to imagine Elijah’s servant observing “Behold, there ariseth a little cloud out of the sea….” (1 Kings 18:44)

From Mount Carmel we travelled to Maagan Eden, a lovely kibbutz hotel on the southern shore of the Sea of Galilee. Later in our trip we also stayed in kibbutzim at Almog and Yad Hashmona. At all three we enjoyed great accommodations and the best of food!

The next day, being a Saturday, we boarded a boat at Tiberius and sailed on the Sea of Galilee. A remarkable experience. At a nearby museum we saw a boat that dates back to the time of Christ. 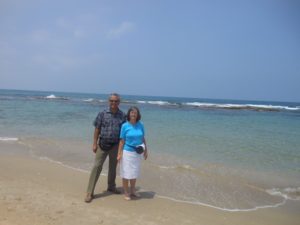 We soon noticed that Saturdays are very quiet in Israel; the widespread observance of “Shabbat” is remarkable, especially in contrast to the secularization of Sunday in our society.

Several former cities in the area of the Sea of Galilee are interesting in that they were ruined, and never rebuilt. They were Bethsaida, Chorazin and Capernaum. It brings to mind Matthew 11:21-24, “woe unto thee…..”

One day we travelled to the Golan Heights. This area was reclaimed by Israel in the six-day war in 1967 and extended somewhat in the Yom Kippur War of 1982. I noticed a fair amount of cattle ranching in the area, which is where the half tribe of Manasseh settled, along with the tribes of Reuben and Gad further south, east of the river Jordan. Their reason for settling there? “….the place was a place for cattle” (Numbers 32:1) 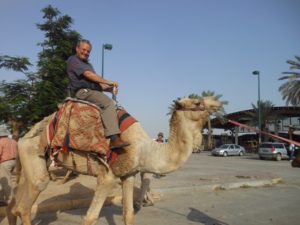 We also visited the City of Nazareth where Maarten Dekker is active as an evangelist on behalf of the Dutch Mission Board. Interesting depictions of life as it was in the time of Christ’s journey upon earth were also interesting to see.

Several days later, driving south, our guide pointed out Mount Nebo, on the east side of the Jordan River, from the top of which Moses surveyed all of the land that would become the land of Israel and Judah “unto the utmost sea” (Deuteronomy 34:2)

Speaking of the Jordan River, I was expecting a real “river”. In fact, it’s probably better categorized as a stream, and the water is quite murky too. It makes the initial reaction of Naaman the Syrian somewhat understandable. (2 Kings 5:12)

An obvious highlight for us was visiting and touring the City of Jerusalem and the surrounding area. We started from the top of the Mount of Olives, from there walking down into the Garden of Gethsemane. Notably the side of the Mount facing the City is almost completely taken up by Jewish graves. In the Jewish tradition they await the coming of the King of the Jews, at which time they will be resurrected and join their King in Jerusalem. In the Jewish faith, it is their most coveted burial ground. 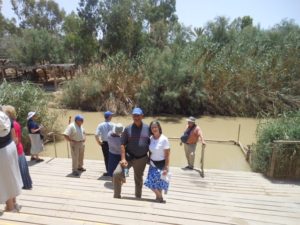 There are certain trees in the Garden of Gethsemane that grow very long, and very sharp, thorns. It doesn’t take much imagination to know that these thorns very likely were used to provide the crown of thorns we read about in Matthew 27:29.

Many of the sites or structures of Biblical times of course no longer exist, but two of those that still exist are the pool of Bethesda (Matthew 5:2), and the aqueducts built at the time of King Hezekiah, also known as the Siloam Tunnel. We walked through a considerable length of it. Amazing, considering it was carved out of the rock almost 2800 years ago! (2 Kings 20:20)

The Dead Sea also is quite spectacular, spectacularly dead and desolate, that is. This of course is the area of the former cities of Sodom and Gomorrah. The utter destruction that was visited upon those cities prevails to this day. Personally, I wasn’t motivated to go swimming there.

The Masada Fortress, although not prominent in any Biblical narrative, was the last holdout of 960 Jews against the Roman army in 73 A.D. They held out for several years, and when the Romans were about to breach the walls of the fortress, the Jews committed mass suicide with the exception of 2 woman and 5 children. The ruins of the Roman army garrisons are still very much visible in the valley below the fortress.

The Wilderness of En-Gedi is mentioned several times in the Bible. It is an area, not far from the Dead Sea, through which fresh spring water flows, supporting unique flora and fauna. Numerous caves are visible where one imagines David may well have taken refuge from Saul. (1 Samuel 24:1) 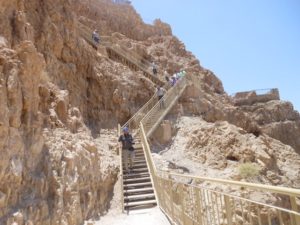 On the second Saturday we were in Israel, we visited, and worshipped with the Grace and Truth Christian Congregation in Gedera. Rev. David Zadok preached in Hebrew, which was simultaneously translated into English, Dutch, Russian along with sign language for the deaf. Approximately 200 people attended church that morning. While Israelis are somewhat tolerant of those who profess Christianity, the congregants of this church do report some difficulty in dealing with the authorities in the area.

Finally, I want to make mention of the Yad Vashem Holocaust Memorial, a testimonial to one of the most horrible events in human history. To suggest it is profound would be a complete understatement. We were there for half a day. Very moving. Of note is the fact that diplomats newly arrived from other countries, posted to Israel, are required to visit this memorial. Failure to do so results in expulsion from Israel.

These were just a few of many impressions we gained as we toured this historic land. We hope to visit Israel for a second time in April of 2017. It is a special place, and a special people. Having now returned to their homeland, their attachment to their country is quite visceral. One needs to be there to appreciate the people, the history and the uniqueness of this land where more history is yet to unfold.